The Heat of It All: Blending the Perfect Peppers 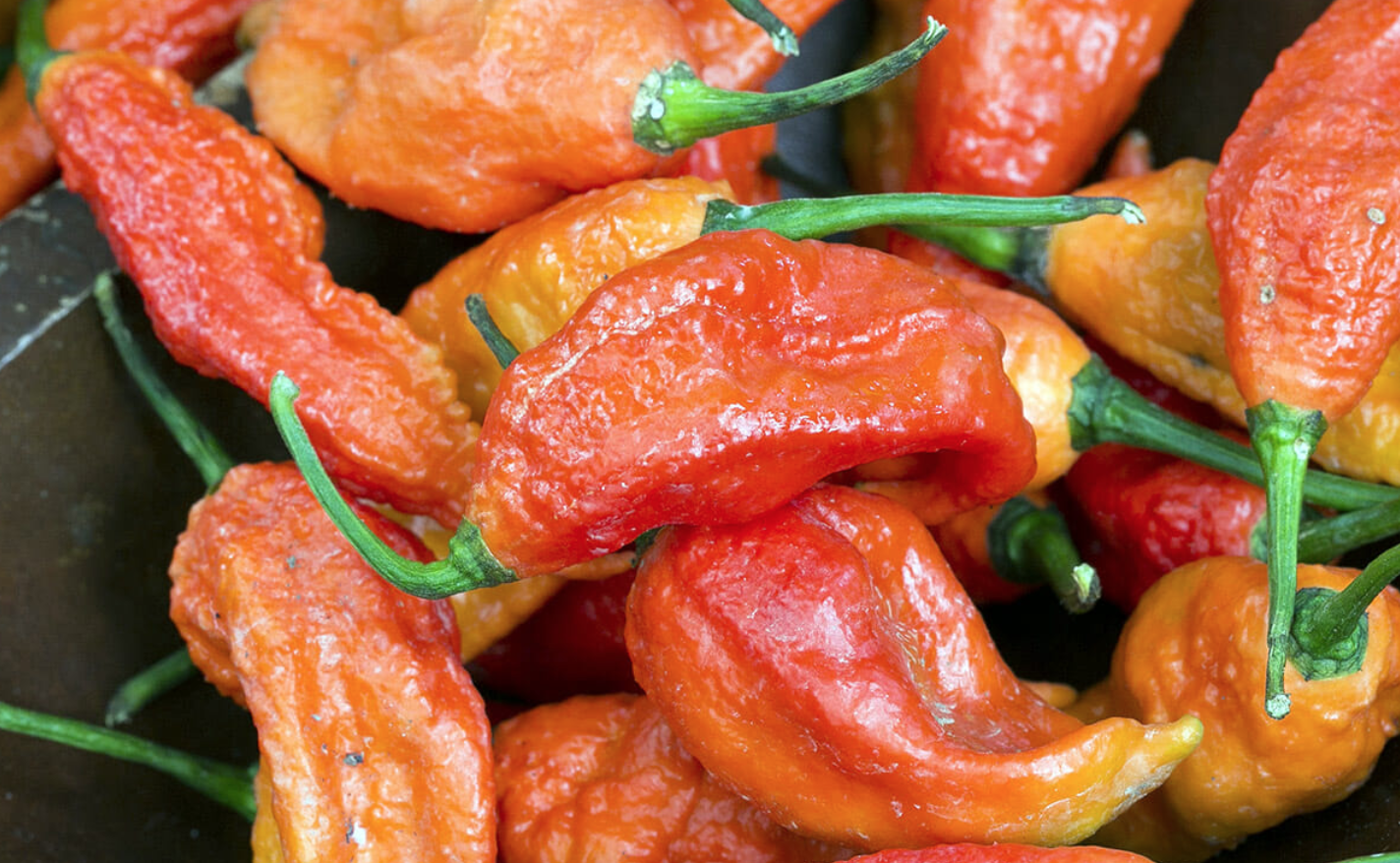 06 Nov The Heat of It All: Blending the Perfect Peppers

The hot sauce brand Heartbreaking Dawns makes its 1498 Cauterizer from the Trinidad Scorpion pepper, the hottest pepper in the land. One morning, I put a few rust-red drops of Cauterizer on my egg sandwich. Fire. Fire. A wild conflagration that water could not put out. But deep behind the heat, on the fringes of the skyrocketing spice, the tastes of carrot, blueberry and apricot lurked. The heat-seeker in me was smiling.

That heat — leavened with those bare hints of flavor — was what John McLaughlin noticed when, once upon a time, he bit into an insanely fiery Trinidad Scorpion pepper (up to 400 times the heat of a jalapeño). McLaughlin, who started Heartbreaking Dawns with his wife, Nicole, was visiting a Pennsylvania pepper farm. “That pepper brought brutal heat, but I fell in love with its floral bouquet,” he says. “Right away, I knew we had to do something with that pepper.”

What he did was mix it with Scotch Bonnets, fruit, carrots and flavorings, creating the first sauce on the market made from Trinidad Scorpions. It was good, but it wasn’t quite there. So McLaughlin opted to shoot for “a similar flavor profile but exceptionally high heat” when he remixed the hot sauce, ditching the Scotch Bonnets for the 2.0 version – the Cauterizer.

Years ago, McLaughlin started growing peppers in his backyard garden. He started simple and planted a crop of jalapeños, habaneros and Scotch Bonnets. “I harvested what we had, came up with recipes, made sauces, put these in bottles and labeled them.” He and his wife had fun growing peppers and half-jokingly putting hot sauces into pro-looking bottles. Later, they started growing “super-hots” and, in October 2009, opened Heartbreaking Dawns. The name comes from “The Drunken Boat,” an Arthur Rimbaud poem.

McLaughlin recommends planting the seeds of super-hot peppers – such as the Trinidad Scorpion, the Congo Trinidad and the once-spiciest Bhut Jolokia (the ghost pepper) – shortly after January 1. Early plantings should be done indoors, which lengthens the growing season — a huge advantage to the colder-climate grower. Come the first week of June, the pepper plants should be transplanted outside. Peppers won’t appear until the first week of August, and plants will produce until November’s first frost. “It’s a short window,” says McLaughlin, “but you’ll get some high-yielding plants and prolific peppers.”

Heartbreaking Dawns, based in New Jersey, has outgrown that window. Today, McLaughlin grows small, experimental batches for his test kitchen and outsources the rest to growers, including a Florida grower who specializes in super-hots. Her name is Wendy Revels.

Revels grows her peppers in two St. Augustine greenhouses. Her two biggest sellers are the ghost pepper and the Trinidad Moruga Scorpion, the Scorpion strain that can crack two million Scoville units. Every year, Revels raises 1,200 plants, and these produce 3,000 pounds of peppers — enough heat to make even the most hardened chilehead blanch.

Revels grows peppers year-round in her Florida greenhouses. Outdoor plants, she estimates, will thrive in Florida from late-April through November. Super-hots love that extra heat. Revels says they do best in partial sunlight, a 60-40 or 50-50 mixture of shade and sun.

“Sunny, hot, dry – that’s the perfect lineup for peppers,” says McLaughlin. The drier they are, the hotter they get. At the beginning, McLaughlin waters his every three days. Then he cuts back to every four or five depending on rain. “The number one thing with peppers is they don’t need a lot of attention,” he says. “Let them tell you what they need. When they look dry, splash them, and you’ll have a great yield.”

To add heat, some farmers will stop watering until their peppers are “extremely wilted.” Then, they’ll flood the pepper field with water. But believe me, there is no need for this. McLaughlin’s method of spare watering works. I can tell from the hole in my tongue.