What is Maca Root? 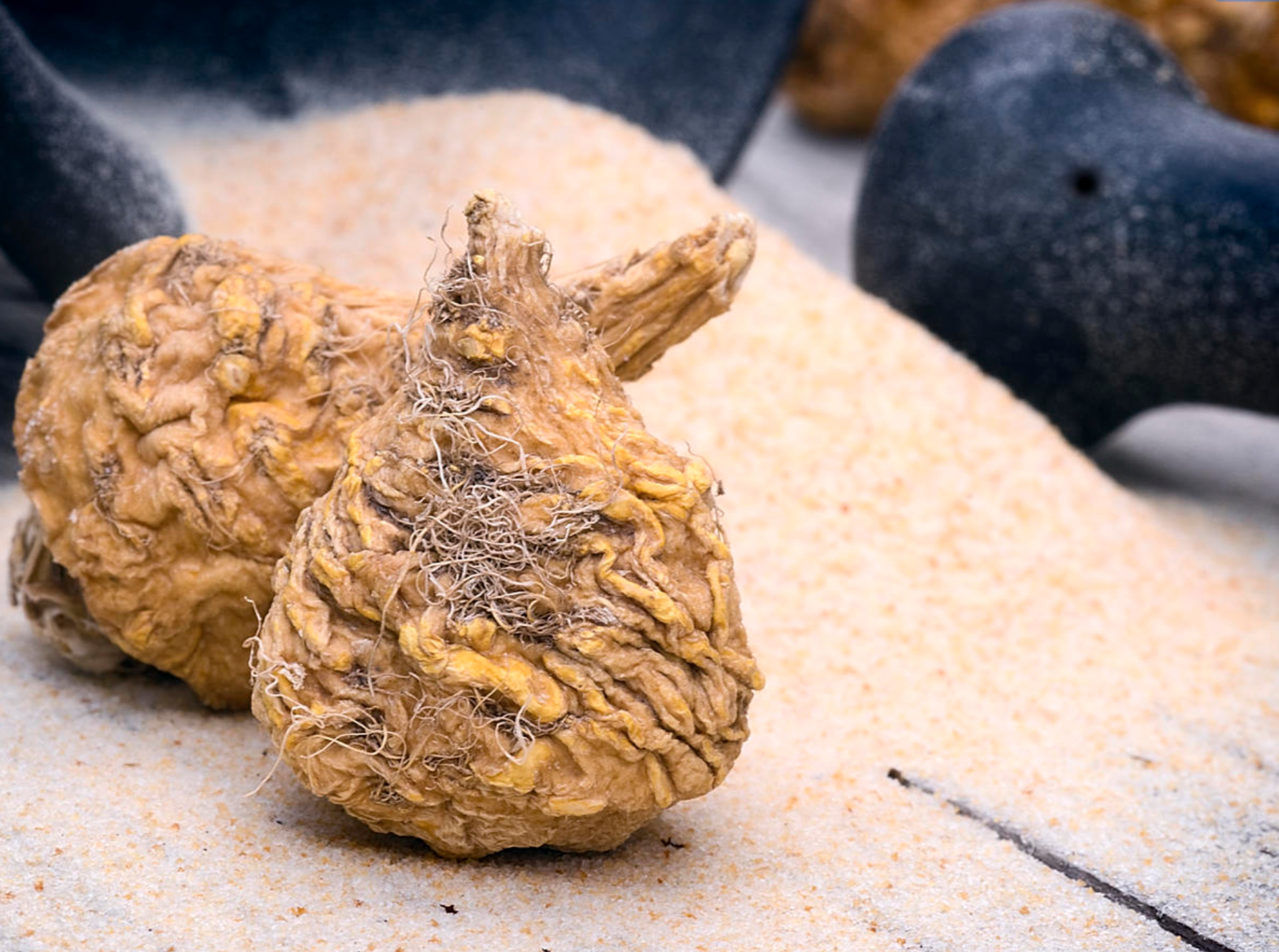 In today’s superfood hungry health scene, a new nutrient-packed ingredient appears to pop up every week aiming to take the health food crown. The latest of these “superfoods” to become the hot commodity in the nutritional community is Maca, a root hailing from the south that is said to have the power to significantly heal and fortify both the body and the mind. So what exactly is this root, and is it really the all-powerful health aid its cracked up to be?

Maca, a.k.a. Lepidium meyenii, or Peruvian ginseng, is a South American plant that was first discovered high in the Andes mountains in the 16th century, and has since evolved from a root vegetable, to a medicinal tool, to an uber-trendy nutritional supplement.

When harvested, Maca—which is technically a cruciferous vegetable, like cabbage and cauliflower—more closely resembles root vegetables like parsnips, turnips, and radishes. The shape, size, and color of the plant can vary widely from circular and flat, to spherical or rectangular, growing in shades of purple, cream, gold, red, black, blue, and green.

Though Maca has been consumed as both a humble vegetable and powerful health aid in South America for thousands of years, it wasn’t until recently that the healing and fortifying powers of the plant’s roots have become a hot topic of the westernized food community.

As a medicinal aid, Maca root—which is naturally packed with antioxidants—has been consumed as a treatment for a variety of health issues including anemia, chronic fatigue, hormone imbalances, menstrual problems, issues with fertility, sexual dysfunction, depression, leukemia, osteoporosis, tuberculosis, and certain types of cancer. Some archaeological findings even suggest that Maca was consumed in great quantities by the legendary Incan warriors before all of their battles as a way to build up their strength and virility.

While there have been a handful of medical studies conducted throughout the years that prove some of Maca’s benefits, there is still limited evidence to prove if or how Maca can act as a cure to any of these medical issues. However, the root has still been relied on for centuries by communities with limited access to modern and Western medicine.

Though you’re unlikely to come across Maca in its root vegetable form in grocery stores across the U.S., there is one popular product through which you can get your Maca fix: Maca powder. Claiming to have such beneficial effects as bolstering vitality and energy and balancing stress levels, Maca powder can be mixed into a variety of beverages, baked goods, and routine dishes like oatmeal or smoothies.

Given its distinctive sweet, nutty flavor and malty texture, Maca powder can be used as an addition to a variety of sweet dishes and drinks, acting as a natural energizer for those who would rather avoid the effects of caffeine. The powder is also an excellent nutritional supplement, packed with vitamin C, copper, iron, potassium, and vitamin B6, while remaining relatively low-calorie and low fat.

While Maca is generally considered safe for consumption when consumed as part of a food product or in small doses medicinally, due to the limited scientific knowledge of Maca’s effects, it is recommended that women who are pregnant or breastfeeding, or those with conditions that are hormone-sensitive, like endometriosis and breast cancer, uterine cancer, or ovarian cancer avoid consuming the root to stay on the safe side, as the root may affect estrogen levels.

To give this up-and-coming superfood a shot, start by adding it to a Mango Maca Smoothie, and get ready to feel as powerful as an ancient Incan warrior… or at least someone who got their daily dose of vitamins.