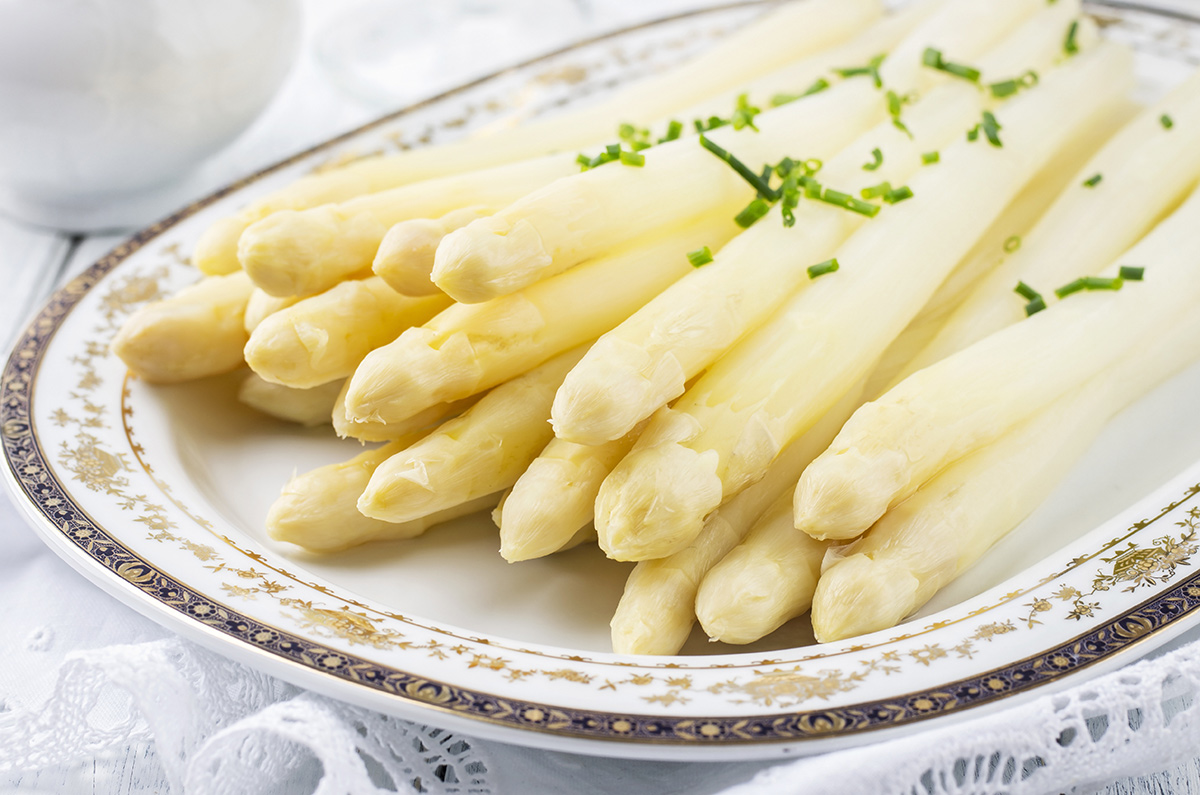 Posted at 11:05h in Food, Plants by Tyson
Share

Otfried Rutsch, a third-generation asparagus farmer in the Rheinhessen region of Germany has a straightforward philosophy: “Lebensmittel sind mittel zum leben” or “Food is the means by which we live.” Sitting at a beer-garden table on his patio, he smiles easily and is proud of his work. His grandfather planted asparagus after World War II. Rutsch remembers mounding the soil over the asparagus by hand. “That was hard work,” he says. Now, his son uses a machine to do the same job.

To obtain the white, tender and somewhat sweet version of asparagus, farmers limit the plant’s light intake, burying it like a treasure under mounds of soil. So, if you stand in a field of white asparagus before and during harvest time, you see nothing green — only row after row of mounded soil. The mounds cover the shoots and block their sunlight intake. Chlorophyll production is prevented, and the white tips barely peek up out of the soil when they are harvested.

A lot of care goes into harvesting and preparing white asparagus, or spargel, since it is, for the most part, harvested by hand in Germany. It’s sometimes called the “king of vegetables,” not only for its calcium, potassium, phosphorus, vitamins A, B1, B2, C, E and folic acid but because a harvester must bow down before each shoot in order to cut it out of the ground. Harvesting white asparagus in Germany is done mostly by guest workers from Eastern Europe, who walk slowly between long rows with pronged hand tools boring into the soil until they reach the shaft and snap it from the root, tossing the muddy, white shoots into woven baskets.

In Germany the royal veggie is in high demand – its own 82,000-ton annual yield satisfies only 61 percent of domestic consumption. Is it the impressive nutritional value of asparagus that explains Germans’ spargel fever? White asparagus contains about 95 percent water content, only 20 calories per 5 ounces, and those tender, sweet-tasting tips do not have any fat or cholesterol – nutritional benefits that are usually undone by their culinary companions: hollandaise, butter or oil. The veggie’s loyal subjects peel every shoot and snap off their woody ends.

White asparagus isn’t cheap. Prices range between 4 and 8 Euros per kilogram, depending on the class you buy. True to German character, there is a precise system by which white asparagus is sorted. Once they are cut, the shoots are classified according to their diameter (bigger is better), whether their tips are closed tightly (a closed tip indicates freshness), and whether they are straight (crooked or spotted shoots are a sign of pests). Sun-tinged pink or purple tips will also land in a lower class.

The high price and the intensity of the labor have contributed to an increase in cheaper foreign labor. This year, the Rutch family is hosting an all-female team of workers from Slovakia. While the fields require no extra watering since asparagus retains water, Rutsch spends a lot of money on water to clean the shoots once they are harvested.

Since the 1990s, many asparagus farmers in Germany have implemented a method of insulation to warm the soil by covering the mounded rows with heavy plastic sheets. Presumably, the soil stays warmer, the shoots grow faster, and the farmer achieves a higher yield.

“I am an old-fashioned man,” admits Rutsch. He sticks with the old methods his father and grandfather used. He doesn’t use plastic covers since there are claims that they could be carcinogenic. “Our product should be good for our consumer, without any question marks.”

Rutsch eschews harvesting asparagus with machines as well, a practice he says he would never adopt. Harvesting by machine would diminish freshness, and he insists on selling fresh asparagus daily. On a typical morning during the season, workers will have harvested, washed and trimmed their daily yield by 10:00 and by early afternoon, Rutsch and his wife will have sold out until the following day.

He points out that people are becoming more educated about food. They are looking for freshness and are not only thinking about their wallets. Rutsch raises his eyebrows: “They have more nutritional awareness.” Many customers drive for over an hour to Rutsch’s stand to buy fresh asparagus and wine at a nearby winery. The fact that Stadecken-Elsheim, where Rutsch’s farm is located, has over three dozen wineries only helps the local asparagus economy. White asparagus is often paired with a crisp white wine made from Silvaner grapes and served with ham, boiled potatoes and hollandaise.

German enthusiasm for this fine vegetable is contagious. People can’t help but smile as the gloomy days of winter fade and these earthy white shoots return once again to their plates.